By now the weather was starting to get really cold and as we drove south towards Portland we kept everything crossed that our Dodge Journey would cope with the wintry roads of Mount Rainier. Signs all the way up reminded us that snow chains would be advisable lest we should wind up in trouble. We carried on anyway and hoped for the best – after all we were already venturing up what is considered one of the most dangerous volcanoes in the world, on the road to the curiously named Paradise! 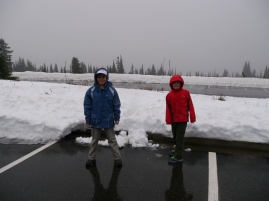 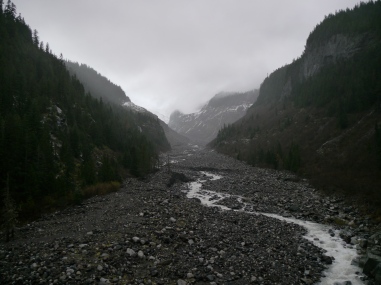 The boys enjoyed their first snow since Maine and after a quick snowball fight at the top we made our way back down before fading light added to our precarious predicament, besides, we still had another 130 miles to do.

Arriving late in the evening in Portland, our three tired boys immediately perked up at the sight of a full size pool table in our latest Airbnb. Less than 5 minutes of discussion and we decided that day 55 needed to be a quiet day playing pool! We rented a copy of the Goonies, filmed in Astoria about 100 miles away, and resolved to visit the next day.

It’s fair to say that the residents of Astoria might be a little tired of tourists searching for locations from the 1985 movie!

Not to worry, we stopped by the old Jailhouse (now the Oregon Film Museum) where the SUV used by the Fratelli crime family is parked outside, still bearing the bullet holes! We then continued on to Ecola State Park where the Goonies opening sequence truck rally was filmed on Cannon Beach by Haystack Rock. There are allegedly three quarters of a million visitors to this spot each year but the rain and wind certainly kept them away whilst we were there. 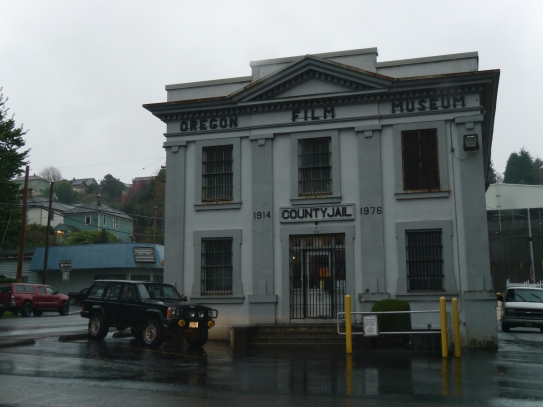 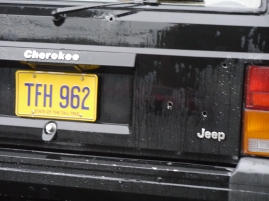 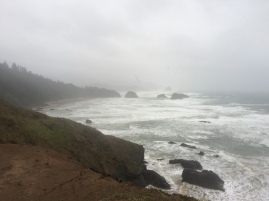 By Tuesday it was time to drive south again and we had a decision to make: Go straight to Fortuna, a mere 420 miles, or take a detour to include Crater Lake making a total for the day of 550 miles.  Or to put it another way – 7 hours of driving, or almost 10…You know what we did, right? 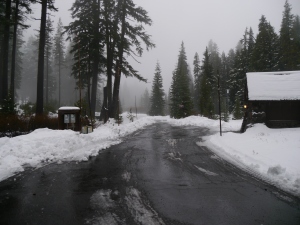