16 hours after leaving for the airport we arrived at the Springhill Suites just minutes from Dulles Airport in Virginia, around 5pm local time.  The hotel has a small swimming pool and spa area, and despite our bodies telling us it was late at night, Teddy and John were keen to try out the facilities.  The only problem was finding the trunks – I’d packed swimming gear but where, oh where, in amongst our 10 items of luggage, was anyone’s guess.  “Packing cubes” I hear you say, oh voice of all knowing hindsight, as usual just a little too late.

Eventually the trunks turned up and I left Nick to look after a sleeping Alex (and to repack said 10 items of luggage, now strewn haphazardly across the floor) so that the boys could burn off all that pent up energy from 8 hours stuck in a metal tube. An hour later we were all back in our room and fast asleep (except for Nick, who I believe was still repacking…).

Predictably, jet lag had us all wide awake by 4:30 the following morning and first in the line for breakfast when it opened at 6am, and we were starving. We all then made use of the pool and by 9.30am we were ready for another breakfast – we can’t be the only family that does that…it was nearly lunchtime for us, after all?!

SR71A Blackbird, Discovery in the background

A few miles up the road from the airport is the Steven F. Udvar-Hazy Centre, part of the National Air and Space Museum and like all the Smithsonian museums, entry is free.  The Centre is huge and is home to the Space Shuttle Discovery, a Lockheed SR-71 Blackbird, an Air France Concorde and hundreds of other assorted aircraft.  Nick and the boys were in heaven; okay, mostly Nick.

The Blackbird – the world’s fastest jet aircraft, stands magnificently in the first hall with the Space Shuttle Discovery visible through the doors behind her. This aircraft could travel from London to Los Angeles and arrive 4 hours before she left!

Alex loved seeing all the planes, although he was convinced that every plane sporting an American air force or navy badge belonged to the Jolly Wrenches squadron from Planes. Indeed the very first plane you see on entering is Skipper – a WW2 fighter plane, the Vought Corsair.

The collection includes Steve Fossett’s Global Flyer which flew round the world non-stop, a collection of ultralight aircraft, many weighing less than John and the microjet from James Bond’s Octopussy. 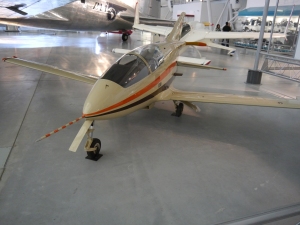 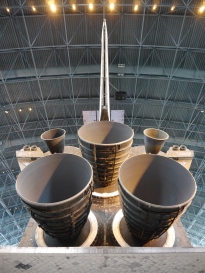 I remember as a child witnessing the majestic Concorde pass over our house regularly on a Saturday afternoon.  The distinctive sound of the Concorde engine was unmistakable and had you looking to the skies to see her passing through – it never got tired.  I find it strange that something that was such a futuristic part of my childhood is completely unknown to the boys and whilst they can see her in museums today, or watch her fly on YouTube, it is just not the same as feeling her as she flew past.  When I was 27 and working in London, I remember ducking out of the office with a colleague to climb to the top of the Barbican to watch her final flight across the city.  I do hope they bring her back someday.

Adjacent to the main hangars an observation tower provides 360 degree viewing of aircraft coming in to land at Dulles International Airport with a live feed to the local air traffic control. On the floor below there is an air traffic control mock workstation to explore.  All the boys agreed they would prefer to fly the planes than sit in the air traffic control centre.

Finally, before we left, the older boys enjoyed a flight simulator experience; John as the senior pilot and Teddy, the gunner. A short training video later

and they were flying.  What none of us realised was that the simulator would complete a 180 degree inversion; if I had known that, I’d have made sure that Teddy fastened his seatbelt a little more tightly…

Once Teddy’s usual colour returned, we headed back to the hotel, exhausted, ready to collect our luggage and make our way into Washington DC for the next few days…

I may have mentioned before that one of the reasons for the name of this blog is as a reference to the response we often get from others when they first hear of our plans: “Oh, you’re brave” being most common. Nick and I have never really considered what we are doing as particularly brave – we have travelled with the boys a fair bit already and, generally it’s been fine.

John took his first flight when he was 6 months old, travelling from Japan to Iceland via London.  I might be looking back with slightly skewed vision but that flight was pretty easy.  In fact, I would say that flying with babies is really not that bad.  Okay, you have to put up with the filthy looks from the odd fellow passenger who arrives for the flight to find themselves a row or two away from your precious infant and imagines the next several consecutive hours filled with howling and screaming.  I am making a sweeping overstatement here, but in our experience, those looks are mostly from young, often single, travellers who have not had children themselves.  If you are lucky enough to be seated near a family with slightly older children, what you get is lots of smiles, sympathetic nods and words of encouragement about how well you are all doing. Our family falls into that category now and so I know that what I’m thinking when I see a baby or two in the cabin is, “Oh thank goodness, mine might not be the only ones to irritate the other passengers…”  I think many airlines do try to seat families together now, for this reason and it really is a good idea.  The truth is, of course, that babies almost never cry for the entire flight and those that do aren’t choosing to do so just to ruin your day – they are most likely struggling with either the changes in pressure in their ears or perhaps there was some mild illness that only became apparent once in the air. However bad it is for the other passengers, you can be sure it is worse for the parents.  For the most part though, we have found that infants are usually a bit grisly on take off and landing and the occasional ten minute bursts every few hours as they struggle to get off to sleep but otherwise the white noise in the cabin helps them drift off to sleep.

Toddlers and preschoolers though – they have a whole lot more stamina,

Our flight to Washington went a bit like this:

Nick: There are no sections of 5 seats together so we’ve got a set of 4 and then a single across the aisle. Don’t worry, I’ll sit next to a stranger….

Me: (thick with irony) Oh, that’s good of you.  I’ll really enjoy trying to keep Alex’s voice below 100 decibels for 8 hours, whilst pinning his legs to his seat because the urge to kick the seat in front non stop is too great, not to mention the joy of refastening the seat back tray every 45 seconds.  I will ask him a hundred times before take off if he needs the toilet and remain sympathetic when, as we are take off, he tearfully tells the entire plane that his poos are coming.  When he drops his chocolate biscuit (the only part of his in-flight meal that he feels able to eat) on the floor, I’ll be happy to give him mine, and when he drops that too, I’ll gladly choose that moment to teach him not to be spoilt and demand his brothers’.

Maybe the blog should have been called “Foolhardy enough to start!”

The good news is that we arrived safely and I now have a flight in hand because it is only fair that Nick gets to experience the magic of in flight bonding with our youngest.

The older two thankfully, have reached an age where they are able to entertain themselves in a quiet and, generally motionless, fashion and, for the most part, that is all we really want.  I am choosing to overlook the fact that John found the on board virtual poker room, mostly because he won; the man from seat 54C did a double take as he left the plane and saw the size of his opponent!

As we enter the final few days before we leave I feel strangely under the weather, a combination of foggy brain and exhausted euphoria; an awareness that I am not firing on all cylinders at the moment.  I can liken it to doing my A-Levels – months of preparation until the brain is swimming in the final days before the exams and as much as you feel you ought to do a bit more cramming, the truth is, there is just no point – “what we haven’t done now…” and all that.  I’ve abandoned the lists and just hope that when we get to the airport we have the essentials – passports and kids, that will probably do.

Nick has passed that unmentionable milestone that has him married to a women in a different decade again for a short while. As with all things, he took it comfortably in his stride, eating a bit too much and enjoying the day with all of us.  The boys and I presented him with a cake that could feed 40 and he readily accepted the challenge.  His real gift will follow later in the year but since he reads this page I can’t share it here.  All I’m saying is that whilst I’m not sure life actually begins at 40, it certainly changes gear.

Talking of later in the year, we have a number of days on the US West Coast with no firm plans at the moment and I’m hoping that amongst the small handful of readers to this blog, there may be one or two who have some suggestions for places to stop between Seattle and San Francisco.  So, lovely readers, if you’ve been to the West Coast lately or know someone who has, please share your recommendations; we would really love to hear them.

East Coast suggestions are also very welcome, of course, although our schedule is a little tighter there and now that his Holiness, Pope Francis has announced he will be following our route, I imagine the main attractions will be crowded.