Day 38 began with a visit to the dentist for John.  The earache he had been complaining about since Boston turned out to be toothache and could no longer be ignored so, with the help of some friends, we found a local dentist who was great with kids. 2 hours later he was all fixed up with instructions not to eat for at least an hour, so perhaps it was a little cruel that we then went straight to lunch! Nick first came to Canada 25 years ago and remembered how, as a boy, he’d enjoyed dining at Swiss Chalet. He described it to me as a low cost chain of family restaurants famous for chicken and ribs, thus I’d imagined a sort of Canadian KFC with a mounty in place of the Colonel.  The experience though is totally different.  Here you select what type of chicken meat you’d like – do you want the white meat or perhaps you prefer the brown?  Here we got to sample the famous Canadian Poutine for the first time – chips in cheese curds and gravy, which I’m sure is very popular in large parts of (northern?) England after a heavy night out instead of a greasy kebab.  The menu also offers much healthier alternatives such as salads and soups which the kids, needless to say, gave a wide berth. 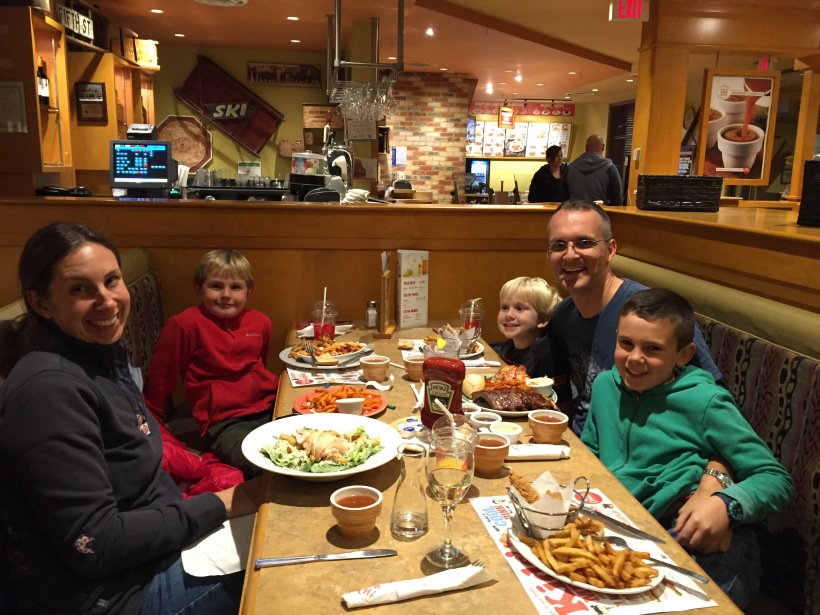 Just up the road we stumbled upon the Canadian Warplane Heritage Museum.  I say “stumbled upon” but knowing my husband this was no accident.  There are only two airworthy Lancaster bombers left in the world. One in the UK that flies with the RAF Battle of Britain Memorial Flight and the other, here. Astonishingly you can get close enough to this one to touch it.  There were very few visitors to the museum during our visit but it was lovely to see a Canadian veteran being helped back into the cockpit for what must have been a very emotional reunion.

The museum is staffed by volunteers, many of whom are retired aviation enthusiasts who are only to happy to share their love of the planes with visitors.  Our guide arranged for the boys to sit in the cockpit of an Avro Canada CF100 and a Canadair CT-114 Tutor , explaining the controls and what the planes were used for.  Later the boys flew simulators, although only Daddy avoided a crash landing! 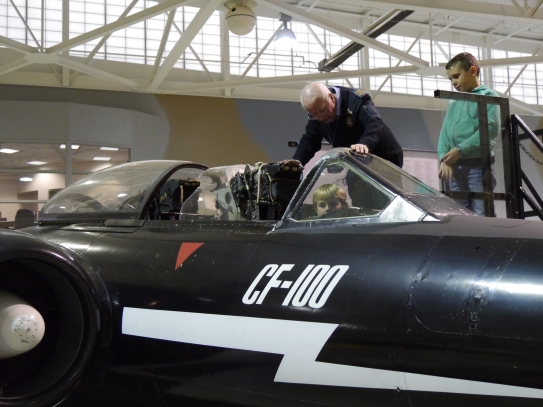 Friday saw us exploring the Royal Ontario Museum, world renowned for its collection of art, world culture and natural history and the largest museum in Canada. John and I ventured in to the Bat Cave, a dark and life like immersive experience showcasing the natural habitat of various species.  Sadly though, there was no Ben Affleck – I checked.  Twice.

The boys enjoyed digging up fossils and dressing in real chain mail so heavy that it was difficult to move their heads.  Later they found an interactive community game where players try to balance competing interests to establish a successful mining operation. ROMining gets the kids to think about environmental impact, community groups, employment levels and profitability.  Hugely educational, it kept John and Teddy engaged for over an hour. 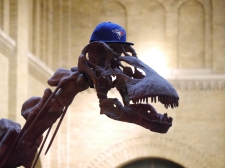 Day 40 was Halloween and this was where my theory that I must somehow be living in an alternative reality really began to take hold. Some days earlier a friend had enquired as to whether Nick would like to take part in a charity 5K run.  It’s fair to say that we are not a particularly healthy couple.  Sure, we belong to gym but I don’t go there to break a sweat – it’s mainly for a leisurely swim and a bit of lunch. Neither of us have ever been running for the sake of running.  Nonetheless Nick decided to give it a go.  He went for practice run after the warplanes visit and decided he would probably be able to finish, so signed up.  Next thing you know he not only finished but came 22nd in his category and 322nd out of almost 1000 entrants. What??  In what world does that happen with just one trial run and an otherwise sedentry and lethargic lifestyle? Git.

Later we joined our good friends Shelley and Jeremy and their family to celebrate Halloween, our first in North America.  Naively I’d assumed that the couple of small buckets we’d been given in a Burger King somewhere on the drive from Montreal would do for trick or treating.  Turns out, what we needed were pillow cases – 3 of them!  Never before have the boys accumulated so many sweets and chocolates on one occasion, it was mind boggling but tremendous fun.  The whole neighbourhood was lit up and decorated for the evening and we met hundreds of kids in all sorts of brilliant costumes having a fabulous time.  I am certain that the boys will remember this halloween night forever. 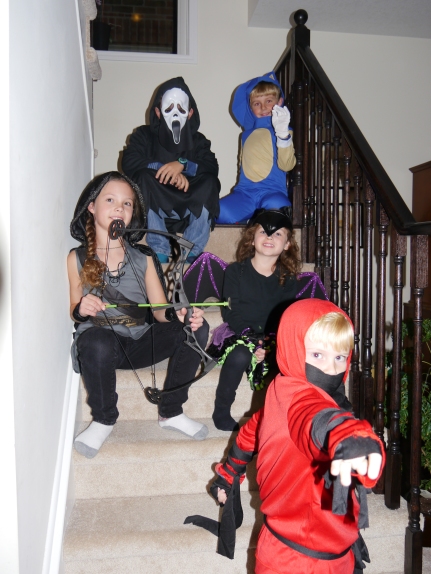 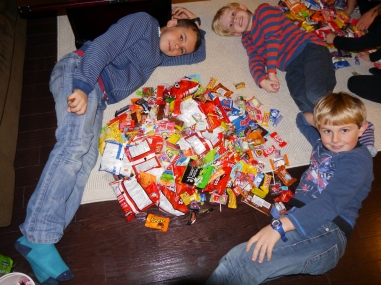 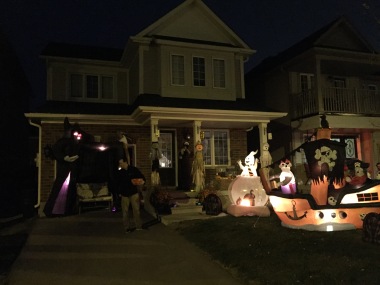 The hardest part was telling them at the end of the evening that we couldn’t keep the equivalent of Alex’s body weight in candy and they would have to leave most of it behind.

If there was one good thing to come from John’s recent dental trouble, it was that this conversation was a bit easier.