Fully rested and recharged we spent the day exploring Brooklyn starting with Prospect Park. Designed by the same duo responsible for Central Park on Manhattan, Prospect Park is quieter but equally as beautiful. At 585 acres there is too much to see in one day so we concentrated on the east side, down to the Boathouse where we had lunch. We then stumbled upon Smorgasburg, a local food fayre open every Sunday until mid October. Having just eaten, the kids weren’t interested in checking out the produce, so reluctantly we continued on to the nearest playground to let them burn off some energy.

Over the road is the Brooklyn Botanic Gardens, a suggestion which was met with more than one objection from the kids but nevertheless we cajoled them in (Nick was still sore about the food fayre). 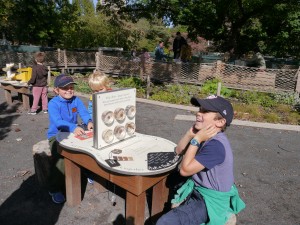 From the outside, the gardens look modest in scale but once inside they open up like the tardis. Within minutes the kids were in the Discovery Garden playing “guess the fruit”, weighing seeds and learning how birds build their nests. Alex enjoyed pond dipping although it was fairly terrifying to watch as, more than once, he looked like he might fall in and without a spare set of clothes to hand, nor laundry facilities at the apartment, well, it would not have been pleasant.

Somehow though he remained upright and we moved on to the Japanese Hill Garden which was spectacular. Although cooler than it had been, the weather was still very bright and clear, showcasing the vibrant Torii over the pond.

The Botanic Gardens are presenting a selection of Isamu Noguchi sculptures throughout the grounds until mid December this year. The older boys used the excellent Kids’ Discovery Guide to learn about some of the work. As well as suggestions for changing the angle of viewing for the pieces, the guide encourages readers to think about the materials used and their different appearance as the seasons change. As a total novice when it comes to this form of art appreciation, I learnt a lot – never mind the boys!  In the meantime, Alex was busy with his Kids’ Field Journal – a sort of I-spy for the most common insects and trees in the park.

The Botanic Gardens far exceeded all our expectations and we could easily have spent many more hours enjoying them but by late afternoon we were keen to get over to Brooklyn Heights for our first view of Manhattan.

Before arriving in New York I asked the boys what they expected the city to be like; their answer described Times Square and the Manhattan Skyline so it was eye opening for them to start with the parks and gardens but now it was time for that famous Manhattan vista.

And it didn’t disappoint.